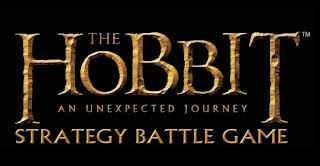 "Let them come! There is one dwarf yet in Moria who still draws breath!!"
- Gimli Son of Gloin, The Lord of the Ring

This week saw the return of Sam and Louis.  I Joined Louis in leading a 1000 point dwarf army to try to reclaim the lost Mines of Moria and attempt to drive the hoards of Moria goblins out once and for all...

As always are playing the new Hobbit SBG rule from Games Workshop.

The battlefield was set up with a 6 x 4 board, full of lava rivers, these obstacles would be fatal if fallen into. Next the scenery was laid out and the game rolled for...


DOMINATION! except we decided to work across the board to allow for a quicker battle. Numerous ruins and structures were placed to represent a ruined Great Hall of Moria.

Next was deployment, each side taking it in turns to deploy a unit at a time. Once the pieces were set it was time for our latest Hobbit Strategy Battle Game to begin.


Below are the pictures from the battle, I will not go into great detail regarding spells, but will simply concentrate on the key elements to the battle and let the pictures show the game...
...who will win Durin and his royal army of Dwarves or Druburz and his hoard of Goblins?!


Final Thoughts
Well, I loved this game, the board added an element of risk and I was impressed with the way the dwarves were so hardy. Sam was drawn into the battle and lost sight of the objectives, resulting in 4 uncontested for the dwarves, Durburz dead and his army broken; their only point came from the centre of the field where they held on to contest their first objective.

Man of the Match
Again this was easy, Sam would say his shaman... that fury was well worth the points, but both Louis and I agreed - (and It hink Sam will too) the Kings Champion was awsome, killing Durburz, goblins and drawing a host of gobbo's in to deal with him... none could even scratch him as he simply cleared the flank of little green Moria Goblins.
Simply awesome.
My next dwarf army will definitely be featuring him in a warband.

Thanks again and I hope you enjoyed it!


Hobbit Dol Guldor / Mirkwood Army (UPDATED)
http://eastgrinsteadwargamers.blogspot.co.uk/2012/12/the-hobbit-sbg-necromancers-army-of-dol.html
We are about to start playing The Hobbit SBG - both skirmish battles LotR/Hobbit and walk through the books/films as well as the odd WotR on club nights.

We welcome anyone interested in playing The Hobbit, Lotr SBG, WotR or any warhammer/40K battle - why not let us know so that we can arrange some starter battles, like the one above, or if you/your club want to challenge us. We have all the LOTR SBG figures and LOTR scenery from the Mines of Moria to the siege of Helms Deep ready and waiting.