Deployment
Reeling from the defeat 2 weeks ago at the hands of Khamul and his orc horde, Dain Ironfoot and his Erebor army of dwarves prepare to battle the forces of battle host of Buhrdur, who having heard of the spoils available in the dwarf halls, led his war band deep into the Iron hills to plunder all that they can.

With the battle field set (6 x 4 field of swords), the dwarves deploy on the Eastern hill, clearly sticking the top of the board and away from the trees where my warg are hiding…

Buhrdur, choosing NOT to hide (thought that might be too obvious) leads the pack and stands his trolls either side of the Angmar orcs.  Gulavhar, deploys at the southern side of the board, to avoid the ballista and to try to flank round to the back of the dwarf army. Druzhag and the goblins stack near the building, hoping to utilise any protect it can offer whilst allowing them to stay in the middle of the fight.

Turn 1
The dwarves all attempt at the double (ATD) and nearly all pass - the dwarf 2HW surge forward and take the woods at the top of the board and Dain with his Khazad Guard storm the gap between the building and the woods, the shields move towards the building.

My orcs walk forward, leaving the trolls to advance in front of them, Buhrdur and a troll face Dain, while two trolls round the top of the woods with the dwarf 2HW hiding.  Druzhag and the goblins take the building.

Craig attempts to shoot the orcs, but miss fires.  With no other units in range to fire or charge, we roll for priority.

Turn 2
I win priority Buhrdur and the trolls move forward again, the orcs follow behind them. The dwarves advance again, but this time a dwarf walking pace and hold in the centre in front of Buhrdur! Druzhag casts shatter shields on the dwarf kinband and fire bolt on Dain.

The orcs also charge the woods with the dwarf kinband 2HW .

Gulavhar flies across the board with ATD and heads towards the ballista, the warg ambushers (Buhrdur Battlehost) come out of hiding and occupy the woods, I then prepare them to leave for war!

Craig shoots and this time the dwarf ballista hits home on lands two hits on Buhrdur, ouch, but fortunately this only leaves him with one wound counter on the very hard to kill (VHK) chart.


Being up for a fight Buhrdur calls an epic strike and later a heroic duel on Dain, using two might points in these phases. Buhrdur easily wins the duel roll and has 5 rolls on the chart… despite Buhrdur hacking and slashing and killing over 8 dwarves, Dain doesn’t die.  The troll with Buhrdur charges and kills another 3, while the trolls attacking the woods kill 5 dwarf kinband 2HW. It was at this point I remembered I should have used my thrown weapons, but simply forgot!

Dain and the Khazad retaliate and manage (with their 2HW and Troll bane) to kill Buhrdur… I was suprised he died, but then there is only so much a troll can take!

One of the trolls at tacking the woods is also killed by the dwarves  Dain’s company, having lost combat again roll on the panic table, but with the shield bearer remain steadfast.


The Dwarf shield kinband charged the building and attacked the goblins… “too late for epic cowardice” I say in sheer worry that they will all perish and I will lose valuable might and magic, but amazingly the end result is 4 goblins dead and 6 dwarf warriors.

I win again and the dwarves test on panic table and are again steadfast.

Again I win priority, and move the warg and Gulavhar towards the rear of the dwarf shields, cast shatter shields again and fire bolt Dain, killing another couple of dwarf warriors. Druzhag summons a single company of spiders and place them directly behind Dain, this is then removed when Craigs ballista kills one of them.


The dwarf shields about face and stare in disbelief at the line of warg heading straight for them. The king Champion, ATD and stands in front of Gulavhar.

The orcs and trolls charge the dwarf 2HW in the woods, the troll in the centre charges Dain (after throwing weapon and missing). The fighting in the woods continues with the loss of my troll and a few orcs, but they lose numerous dwarves and the fight is a draw. 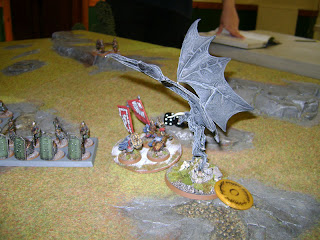 Gulavhar calls heroic fight in preparation for the charge, eyeing up the prey.

The Kings Champion responds and calls a heroic Duel... a nervous moment, but my luck with the dice is uncanny and Gulavhar easily wins the duel and unleashes hell on the champion, killing him and his mini entourage. 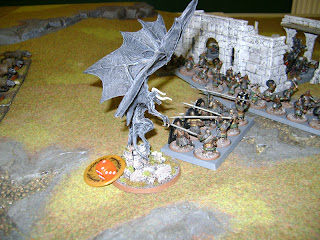 Having called the heroic fight, I can recharge for free and hammer into the side of the vault wardens, who lose their shield bonus and take over 8 hits... they also all die.

I am starting to like Gulavhar - he has just dispatched both the kings champion and the vault wardens (245 points - which is more than Gulavhar cost!)
I sense there is more to come and start to eye up the next prey!


The warg fail to have the distance to charge and reach the dwarf line so do not charge.

The round ends and the dwarves are looking very vulnerable.

Druzhag cast more spells and shatters shields and fire bolt as well as summon another company of spiders near the flank of the dwarf shields. The Ballista shoots at the orcs and claims 5 casualties.

The fighting in the woods results in more dwarfs 2HW dying and the last troll on that side, the dwarves fail their courage test and have to use their might to allow what’s left of them remain in the woods, clearly hiding from those nasty orc’s and trolls!


Gulavhar, moves ATD and lands directly behind the vulnerable dwarven ballista - almost breathing down their neck.

Again I use Gulavhar and call a free heroic fight... this allows me to charge the ballista, easily kills the crew, literally ripping them to shreds before charging into the side of the dwarf warrior (without shields again). 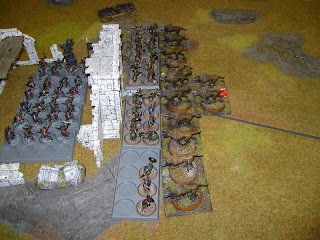 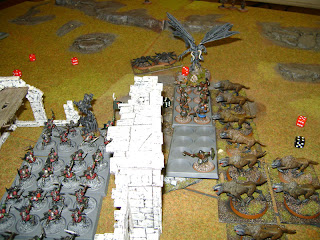 The wild warg spread out on their move and then rolled a 6 on the charge which gave them an unstoppable charge straight into the dwarf warriors, (without shields).

Gulavhar, thirsty for blood joins the wild warg attack (using his heroic fight) and slams into the side of the dwarves.

The result of this double attack finishes the dwarves off.


... Craig concedes defeat and the game.
Outcome:
This was an outstanding victory for Angmar, the dwarf army again failed to stand up, enough even to get near to winning the battle.  Buhrdur should have ambushed and attacked the rear… Gulavhar was awesome, he performed far better than I expected and his free ability ensured he killed more than his points value, just wish he had jumped into the fight sooner!  I loved this battle host and the flexibility offered by the monsters and cavalry.

Final thoughts:
I think Craig has given up on Dwarves at this point level, they are strong and good defence, but their weakness is they are too slow and are easily out flanked and attacked from the rear, they also do not have any magic.

Our next match will see Craig try his hand at 1000 points worth of Gondor - I think I will field Gothmog’s Morannon battle host and try that for size. We also have two other gamers interested in a battle so we will see how they get on.